Share All sharing options for: An In-Depth Look At Concessions At Honda Center For Ducks Fans 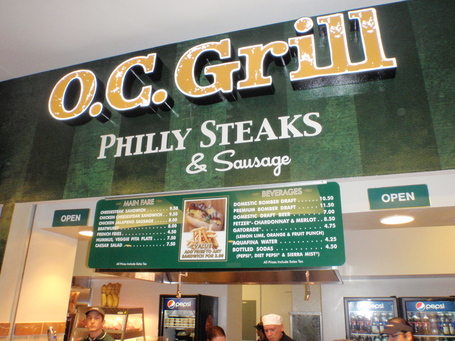 In addition to providing top-notch coverage of the Ducks on the ice, the folks at Anaheim Calling are now giving their readers a series of reviews of the food at Honda Center, home of the Ducks. The Ducks have a new partnership with Aramark this year for their concessions, and Anaheim Calling reviewed all the new food choices.

I had been to all of the preseason games, so I knew that in the vast overhaul of the concessions, the club level had remained relatively unscathed.   The carved sandwiches and nacho bar were still there on opposing sides, though there were a few new additions to the salad choices and a cuban sandwich I didn't remember.  The club level didn't need much fixing, and they didn't do much to it.  I was disappointed and relived at the same time, a strange feeling indeed.

Robby liked the cheesesteaks at the OC Grill, but loved the fries:

The fries get their own paragraph. They were that damn good. They were well-seasoned (think the seasoned fries that Rally's used to have), and the order size was hefty. They were also crispy, which is not something you can say about most fries you get in a stadium setting.

Daniel had this great line about the Bluewater Grill:

However, a complete look at the menu reveals what might be one of the worst deals in the entire arena, if not all of sports culinary history.

Each individual review goes much more in depth, and at multiple locations throughout the arena, so be sure to reach each one.

For more great Ducks coverage, be sure to read Anaheim Calling on a regular basis.