The experts heavily favor Ohio State, but Wichita should be accustomed to the underdog label by now.

After squeaking by Iowa State and Arizona on last-second three-pointers, Ohio State will have the displeasure of facing upset-minded Wichita State in the Elite Eight. The Shockers have done just that, taking out perennial contenders Pitt and Gonzaga, while eliminating Cinderella-to-be La Salle.

Wichita State has been phenomenal in the tournament, pounding the paint at will and getting big buckets from Cleanthony Early. The Buckeyes have been getting clutch shots late, with game-winners by LaQuinton Ross and Aaron Craft. Let's take a run through some experts' picks to get a better idea of who will be heading to Atlanta to play in the Final Four:

Before Thursday's Sweet 16 action, ESPN's experts selected the team they though would win each region. Nine of the 11 experts picked Ohio State, while Jason King and Bruce Pearl picked Arizona. They are already wrong, as Ohio State took care of Arizona on Thursday. But you get the idea: no love for Wichita State.

Joseph Nardone of RantSports predicts much of the same for the regional final, predicting a 65-61 victory for Ohio State. He notes the physical play of Wichita, but also the apparent never-ending luck of the Buckeyes.

The lone standout to pick Wichita is KOAT out of Albuquerque, who cites -- what else -- the "big play" of the Shockers. But the piece goes on to point out the disparity in field goal percentage between Wichita and its opponents. The Shockers, who led their conference in field goal defense, have held their opponents to just 35.5 percent shooting. That includes a Gonzaga team that shot almost 50 percent on the season up to that point.

The analysis here is simple -- if the Buckeyes can score over 70 like they have in every game this tournament, they will win. If the Shockers can bang bodies inside force Ohio State into bad shots, they will reach their first final four in almost half a century.

For more on Ohio State, check out Land-Grant Holy Land. For more on Wichita State, head over to Mid-Major Madness.

Here's how we got here, West region style: 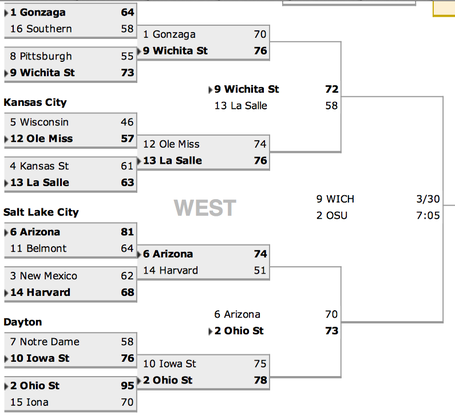 • The best and worst from a sweet Thursday