Not much went according to plan in the West region, with Ohio State the best squad left standing amongst a No. 6 seed, a No. 9 seed and a No. 13 seed.

The West Region! Where nothing went according to plan, insanity reigned and the person who picked teams based on mascots got your office pool looking topsy turvy.

Thursday brings the regional semifinals in Los Angeles -- you know, the Sweet 16 -- and there is a near complete absence of chalk. While other brackets had an upset here and there, the West went fully insane, with only one of the top four seeds winning its first two games and making it to the Staples Center.

That leaves two strange matchups, but we'll take them nonetheless as some teams look to continue shocking -- ugh -- runs to the Final Four.

Here's a look at Thursday night's matchups, with both games on TBS. All times listed are Pacific:

We were so close to this region being even more nuts: No. 10 Iowa State pushed the Buckeyes, with former Michigan State player Korie Lucious reminding the Big Ten champions how good he was by drilling five threes. But there was a questionable charge call, and the Buckeyes wound up with the ball and about 50 seconds to play. The Buckeyes didn't go 2-for-1, and they didn't give the ball to their star, Deshaun Thomas -- they had Aaron Craft pull up for a long two, which deflected out of bounds off an Iowa State defender. With the ball again, Craft held again, pulled up and the ice water flowed as he drilled a three for the win.

Arizona got lucky from the topsy-turvy nature of the bracket, as the Wildcats had to face No. 14 Harvard instead of regional rival New Mexico. They trounced the Crimson, with Xavier transfer Mark Lyons dropping 27 as he went to his second Sweet 16 in as many years with two different teams. Craft, an irritant on defense, will likely end up on Lyons, while the Wildcats will have to find an answer for Thomas, who has been all-everything for the Buckeyes and can score at will.

Which one of these mid-major squads can rise to the occasion and make it to the Elite Eight?

The Explorers have proven they deserved one of the final at-large spots in the tourney, winning their First Four game against Boise State, absolutely pounding Kansas State in the first half, going up 18 before holding on for a two-point win in the Round of 64. And then came their Round of 32 win over Ole Miss, where Tyrone Garland swooped to the basket and laid in a game-winner in the final seconds for a 74-72 victory over the Rebels.

The Shockers just outshot Gonzaga in the Round of 32, who had only lost twice on the season. Wichita State was up 13, and that was before it started drilling three after three after three, hitting five in a row at one point, finishing 14-of-28 from beyond the arc.

Each side has things they can exploit: La Salle is led from the backcourt, with Tyreek Duren and Ramon Galloway splitting scoring and passing duties and each possessing silky shooting from beyond the arc. Meanwhile, Wichita State lives in the paint, as the Shockers have a strong rebounding team behind Cleanthony Early and Carl Hall, who are 1-2 in scoring and 2-1 in rebounding on the team, respectively. They're best on the offensive glass, where La Salle will offer little resistance.

Here's how the West regional has played out so far: 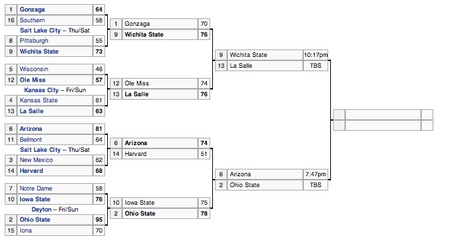 • Get ready for an all-B1G Final Four