The adidas company has put out some new Sport Performance Underwear. We wanted to see how they performed for the average sports blogger.

If you buy something from an SB Nation link, Vox Media may earn a commission. See our ethics statement.

The good people at adidas asked us to review some of their new, fancy Sport Performance Underwear. Since we here at SB Nation are dedicated to quality investigative journalism, we said "sure!"

But what we wanted to do was a review that really got to the heart of the matter. These undies are state-of-the-art gear for athletes, so that they can perform better. We wanted to know if they could make US, as sports bloggers (and probably a lot of YOU, as sports fans) better at what WE do. Or at the very least, more comfortable.

We put the adidas Sport Performance Underwear up to a rigorous test that approximated what the average sports blogger's day is like. Could these measure up?

The first thing we had to determine is how cool the underwear looks, because a big part of determining whether to buy something (as sports fans) is how cool something looks. We received the boxer brief option, which is good, because if you're an adult and you're not wearing boxer briefs then I don't even know, man.

Here's what the basic design of the underwear looks like: 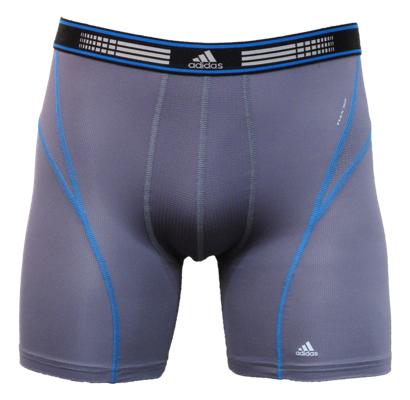 Pretty radical, honestly. They look like a combination between bike shorts and what would happen if Gambit from the X-Men decided to turn his old tights into cut-offs during the summer. (Is there a "jorts" equivalent for cut-off tights? "Torts"?)

The underwear works sort of like compression underwear, but not as restrictive. They're extremely form-fitting and, much like bicycling kits, they sure don't leave much to the imagination, if you know what I mean. But that can either be a good thing or a bad thing, depending on what you're going for. Also, I guess, depending on who sees you in them.

Another cool thing about these guys is that some of them come in a really cool little aluminum package, like it's a Capri-Sun, or astronaut food. WARNING: THESE ARE NEITHER CAPRI-SUN NOR ASTRONAUT FOOD. THEY ARE UNDERWEAR.

As any sports blogger (and most sports fans) know, the couch is where you'll do the vast majority of your ... well, whatever it is that you do, exactly. As sports bloggers, most of our time is spent either watching sports on TV or reading about sports online (or maybe daydreaming while thinking about sports; like how dreamy that Matt Barkley is). So it's important that one's underwear is comfortable for those long stretches of time where your underwear-area isn't doing much in particular, other than being in contact with a (hopefully) sturdy couch.

In this respect, the adidas Sport Performance Underwear performs admirably. The compression/form-fitting aspect never seems restrictive in any way when sitting for hours at a time, but the biggest treat is when you get up. I'll get to that in a moment.

The underwear does not appear to provide any advantages to typing more efficiently, more quickly, or making fewer mistakes. However, it also does not appear to hinder any aspects of the sports blogger's bread and butter: typing up opinions about sports. The undies break even on this one. It's possible that there may be typing-specific performance underwear at some point, but that day is not today.

The underwear gives you the support you crave as you root for your team. It's important to have support, because sports bloggers and sports fans can both get very passionate about things, whether it's an overtime touchdown pass or arguing about batting average vs. OPS+. You don't want to risk a severe lack of support during your most enthusiastic rooting moments, lest all your business go flying around all willy-nilly. These aren't things you think about until you finally have everything battened down, but it sure is an eye-opener once things get snug.

To fully investigate, I not only put the Sport Performance underwear to the test via rooting at home, but also at a live baseball game. I'm pleased to say they passed both tests with flying colors and I was able to root to my heart's delight, unhindered by discomfort.

This final category is where the underwear really shines. The Sport Performance boxer briefs feature mesh paneling on the hips and across the rear of the underwear, just below the waistband. This may seem silly at first, but IT IS A GODSEND. This is definitely the crowning achievement of the product and a legitimate game-changer for underwear.

See, every time you get up or move around, you get a blast of sweet, fresh air in your underwear region. Consider it the "flavor crystals" of underwear. Uh, unless that's gross and weird. But mercy me, it is always a welcome surprise.

This feature spices up the normal blogger routine of:

- run to the fridge

- run to the restroom

- run to the store

Each time you move, you feel refreshed. It's nearly a religious experience. I think that more underwear companies should include the mesh paneling aspect, not just for "sports" unmentionables, but for all walks of life. There are plenty of "active" niche underwear options, but very few "sedentary" options. And no, Joe Boxer doesn't count.

Certainly at least one sports blogger appreciates what this underwear is bringing to the table. Thanks, adidas, for making me think about my underwear for a week. It was a lot more fun than it should have been.