Andrew Bynum, welcome to the City of Brotherly Love! In an effort to make the former-Laker feel at home in his new surroundings, the Philadelphia 76ers quickly posted a billboard to celebrate his arrival as shown in this tweet from 76ers PR guru Michael Preston. 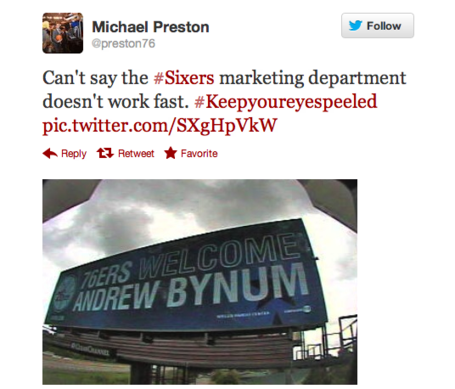 Bynum had been mentioned in trade rumors for months before the young star was involved in a four-team trade that sent disgruntled Orlando Magic center Dwight Howard to the Los Angeles Lakers and Andrew to Philly. After spending all seven years of his career under the bright lights of Hollywood, Bynum's new surroundings will be closer to home, just two-hours down the interstate from his alma mater St. Joseph's High School in Metuchen, New Jersey.

Andrew has yet to make his first official appearance as a member of the 76ers. All that changes on Wednesday at 9:15AM PDT, when Bynum has his first press conference with the Philadelphia media. The event will be streamed live from National Constitution Center on NBA.com.

For all updates to this story, visit Silver Screen and Roll, Liberty Ballers, and SBNation LA.