Share All sharing options for: Tour of California 2012, Stage 6: Stage 6 Preview, Television Information, How To Watch Online And More

Stage six of the 2012 Amgen Tour of California will likely see 2011 Champion Chris Horner make his move a bit earlier than he had planned. Horner was public that Saturday's mountaintop finish at Mt. Baldy was where he intended to win the race, the same place he was able to do so last year. But he hadn't counted on losing quite so much time in Thursday's individual time trial, where a poor performance put him around two minutes behind all of his GC rivals. If he wants a shot at back-to-back Tour of California victories, he'll need to go on the attack early and often in Friday's stage. 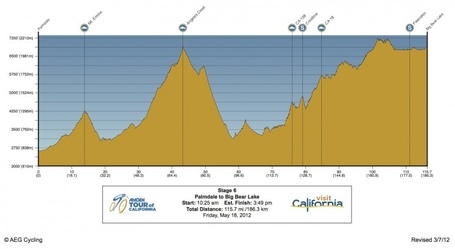 It's a stage with a lot of opportunity for an attack, as the riders move through 115 miles with two massive climbs. Horner will be looking for his opportunity, but he'll have to fend off the other GC heavyweights. Tejay Van Garderen (BMC), Peter Velits (Omega Pharma-Quick Step), Robert Gesink (Rabobank), and Andrew Talansky and Tom Danielson (Garmin) are all well placed near the top of the GC standings and will be on the lookout for any of Horner's attacks.

However it plays out, Friday's stage is the first of a 1-2 punch that will decide the race. Desperate men make for good bike racing, so don't miss it.

Stick with this storystream for previews, recaps, updates and more from the 2012 Amgen Tour of California. As always, cycling news and quality analysis can be found at Podium Cafe.

Tour of California 2012: Robert Gesink Takes The Overall Victory In The 2012 Amgen Tour Of California