Jeremy Lin has taken over the sports world in the last few days, and he officially had his coming out party on Friday night as the Knicks battled the Lakers on ESPN. Not only has Lin already sold an incredible number of tickets and jerseys all by himself, but his supporters in New York are starting to make signs for the young point guard.

While some of the signs have been creative and fun, one fan took it to a different level. And that isn't a good thing. We have a photo after the jump. 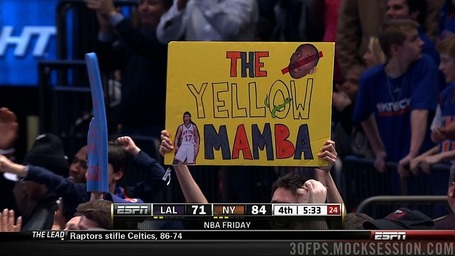 Not only is it incredibly offensive, but it's also pretty pathetic to compare Lin to one of the best players of all time. Come on, Knicks fans. Leave that sign at home next time.