Why is Blake Griffin's productivity down this season?

Blake Griffin's scoring and rebounding numbers are down from his first two seasons in the league. Is there an explanation for this decrease in productivity?

Share All sharing options for: Why is Blake Griffin's productivity down this season?

The Los Angeles Clippers have had an up and down start to the season. They opened with back-to-back wins over the Grizzlies and the Lakers, the team they beat in the playoffs last season and the team whose shadow blots out the sun in Los Angeles, two teams they love beating. They followed that up with back-to-back home losses to Golden State and Cleveland, two teams they clearly took too lightly. They then went on an impressive six game winning streak, followed by an equally unimpressive four game losing streak. The team has alternately looked like a legitimate title contender and a hot mess.

But one thing has been true throughout the first month of the NBA season. Superstar power forward Blake Griffin has not been producing at nearly the same level he did his first two seasons in the league.

He's still a very productive player. He's averaging a smidge less than 17 points and 9 rebounds a game, which is nothing to sneeze at. The vast majority of NBA players would kill for those numbers. But for a guy who came into the league with what seemed to be a lifetime membership in the highly exclusive 20/10 club (20 plus points per game and 10 plus rebounds per game) the drop off is precipitous.

Some of the decrease can be attributed to the simple matter of reduced playing time -- the Clippers have a much deeper bench this season featuring Lamar Odom among others, and they've played relatively few close games so far. As a result, Griffin's minutes are down for the second season in a row, from 38 minutes per game as a rookie to 36 last season to 33 through the first 15 games this season. Griffin and the Clippers will happily take that reduced workload, even if it comes with a decrease in his per game averages.

But his numbers are off on a per minute basis as well. Pretty significantly off.

Griffin's per minute scoring and rebounding actually decreased slightly from his first season to his second season. As a rookie his per 36 minute averages were 21.3 points and 11.4 rebounds, and those numbers decreased to 20.6 points and 10.8 rebounds last season. However, the decrease in scoring was perfectly understandable as Griffin was playing on a much better team that didn't require him to shoot as much, and it was accompanied by a significant improvement in his field goal percentage, from .506 to .549. Slightly lower per minute scoring with significantly better efficiency is a great trade off that any team or player would happily take.

There's no such happy explanation this season. Griffin's per minute production is down across the board. His scoring is off by 11 percent, his rebounding has decreased by 12 percent, and there's no efficiency gain to soften the blow -- his shooting percentage has dipped below .500.

Digging deeper into the numbers the situation gets worse. Griffin worked on his face up jumper over the summer, a needed addition to his offensive arsenal. Indeed, he's hitting a very respectable percentage on the midrange. Through 13 games he was shooting 44 percent from 16-23, ranking him among the top 10 starting forwards in the league from that distance (he's cooled off a bit the last couple of games). 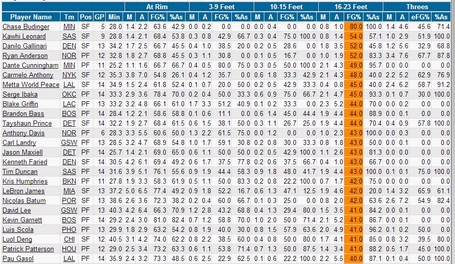 So that's good news right? He has worked on a weakness in his game and improved. So why are his numbers down?

The answer lies in the types of shots he's taking. In the table below you can see Griffin's shot distribution in each of his three seasons in the league. In his first and second seasons more than 70 percent of his shot attempts came within 10 feet of the basket with the single biggest percentage of shots coming right at the rim. In an admittedly small but still significant sample size of 15 games this season, his attempts at the rim are down almost a third compared to last season, and almost all of the extra shots are coming from 16-23 feet.

It's all well and good to have an improved jump shot, but with the possible exception of Dirk Nowitzki, shots around the basket will always be the higher percentage bet. Griffin's field goal percentage within 10 feet of the basket is essentially the same this season as it was his rookie year, only slightly worse than his second season, and he's hitting from the midrange at a career best level. But it's never going to be a high percentage shot, so as he takes more, his percentage is bound to decrease.

As it happens, his shot selection also explains his decrease in rebounding. Griffin's per minute defensive rebounding numbers are actually slightly up over last season -- the drop off has been entirely on the offensive end, where he's gone from 3.3 offensive boards per 36 minutes to just 1.8. If you're taking more shots away from the basket it means you're spending less time near the basket, which is where the offensive rebounds are as it happens.

Some of this is an inevitable survival tactic. Clipper fans know how much punishment Griffin took in his first two seasons in the league bulling his way to the basket. A viable jump shot and a mix of field goal attempts that features more jumpers has the potential to extend Griffin's career by years.

In his first two seasons in the league, Griffin insisted on getting to the rim and it took a toll. He's a more patient player at this point. But guess what? It turns out that insisting on getting to the rim is a good thing for scoring efficiency. Griffin may eventually develop the deadly midrange game that will allow him to put up his typical scoring numbers, a la Karl Malone. But he's not there yet -- not really close. Griffin needs that midrange jump shot in his arsenal, if nothing else to keep defenses honest. It's inevitable that he will take more -- and hopefully the threat will set up opportunities to drive to the basket.

The Clippers broadcast analyst Mike Smith has always been fond of saying that when Griffin develops a midrange game he will be unstoppable. In theory that may be true -- but in practice, at least in the first month of this season, Griffin is stopping himself by settling for what remains a relatively low percentage shot far too frequently.

So should Clipper fans be worried? Probably not. Griffin is a very smart player and he will make the necessary adjustments. Every player season has ebbs and flows, and Griffin has likely just begun this one on a down cycle. Monday night against New Orleans he shot 1-9 and finished with a career low four points. That's not likely to happen very much. At some point he'll go on a tear and bump his numbers back up towards the levels to which we've grown accustomed. But he needs to figure out that the thing that makes him special, the thing that makes him Blake Griffin, is relentlessly attacking the basket. It's great to have an improved jump shot -- now stop using it so much.