The Lakers will be wearing an all white jersey this Christmas. Past Christmas Day jerseys simply featured a snowflake patch.

The NBA and adidas today officially unveiled their 2012 Christmas Day uniforms to be worn in the series of games to be played on Christmas Day. Two changes from what was reported earlier: the Clippers were not featured in this release though they did have an all red uniform in the video game stills, and the press release makes no mention of these becoming weekend uniforms throughout the second half of the season.

Whether or not these are a one off is yet to be seen, but we do have an official image of what the Laker Christmas uniform will look like. It's all white, with only outlines to suggest letters and numbers. Perhaps this is to suggest that famous LA snow we hear so much about. 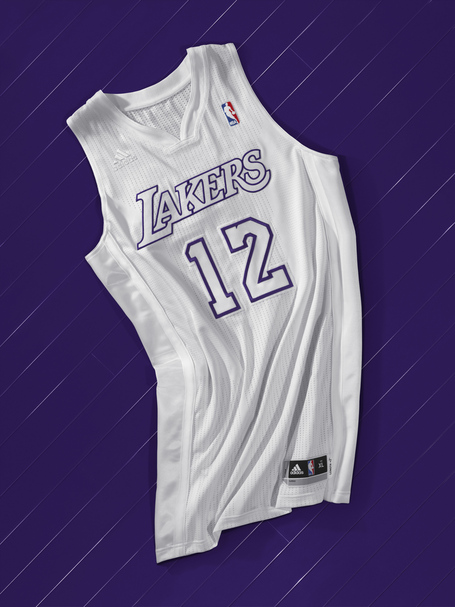 Experience tells us that those numbers are going to be unreadable once the action gets going, though luckily NBA announcers are court side where they can make out faces. It's going to be quite awful for the reporters in the upper press box at Staples Center, however.

Still, it's not a bad looking fashion jersey. Certainly it'll be a hot seller over the holiday season. It's just not very practical, as a piece of uniform equipment.

From a different angle, it kind of looks like a white tank top (popularly known as wife beaters) with some numbers sewn on. So that's unfortunate.