This morning Uni-Watch.com came out with a screenshot of what the Los Angeles Lakers' winter uniforms might look like, from an upcoming video game. Roundballmanor originally broke the news back in July.

The LA Lakers will be wearing special winter uniforms this year; all white with outlines for for the letter, numbering, and logos. Whether they will debut for the Christmas game is a matter of current debate, though it is known they will be worn on weekends in the second half of the season. Roundballmanor originally broke the news in July, but this morning Uni-Watch.com came out with a screenshot of what they might look like, from an upcoming video game: 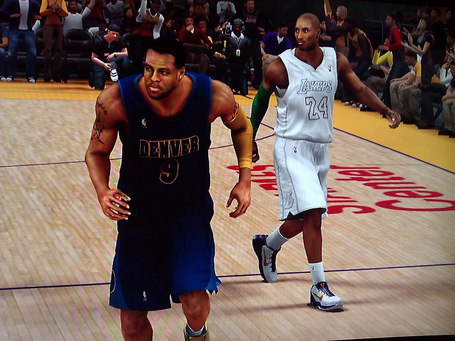 I'm dreaming of a white Christmas. Just like the ones I used to know. Divorced of tradition, it's not a bad looking uniform. On an all white uniform, all the numbers and letters should still be legible and it's a clean looking jersey. Certainly leaps and bounds better than that Nuggets uniform in the foreground.

The Los Angeles Lakers have been purple and gold since Jack Kent Cooke purchased them in 1965; they're one of a handful of teams that wear yellow instead of white at home and certainly the most famous. Since moving into Staples Center in 1999, the Lakers have worn white as a special Sunday uniform.

The NBA has played games on Christmas since its inception, but it's since 1983 that it's been a television tradition on the level of the NFL on Thanksgiving. That was the year CBS broadcast a game between the New Jersey Nets and New York Knicks, while ESPN broadcast a game between the Lakers and Portland Trailblazers. NBC and now ABC have continued the doubleheader tradition. This year, we're up to five Christmas games.

The Lakers will be playing the New York Knicks at the Staples Center on Christmas. It will be broadcast at 12pm on ABC, the opening act with Miami Heat vs. Oklahoma City Thunder headlining the ABC doubleheader. Those games will be sandwiched by three ESPN games.