Pictured is a paid model that was thrown into practice to show off the new duds.  He was injured later when he was mistaken for a wide receiver on a crossing route. Early indications... indicate he suffered a concussion and can return to the runway in two weeks. (Picture via @USC_Athletics.) 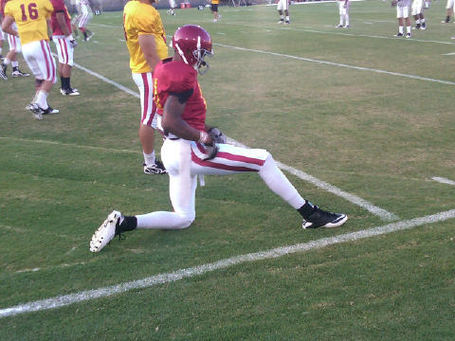 Just look at those beauties. This is obviously the meager beginnings of what will undoubtedly become an Oregon Duck-esque movement for the Trojans, where the team will sport a new color combination each week, affix some sort of bird-like-wing design or something to do with horses on their shoulders, and most likely begin wearing the true-to-life Trojan warrior feathery helmet on game days.

It appears that Nike has already begun distancing themselves from the soon-to-be sanctioned Ducks and moving towards sponsoring the sooner-to-be unsanctioned Trojans. USC will be their new cash-cow, giving fans for both universities much consternation and anxiety. There will be a battle between the traditionalists and progressives over uniform changes, and subsequent player vanity will be at an all time high. I suspect you'll see more creativity with shoe spats, multiple arm band usage, Allen Iverson one-arm shooting-sleeves, aggressive belt taping, and the like. It's going to be terrible.

I just made that whole thing up. Except the pants thing. Those are real pants.