The Dodgers have not had a good season on the field, at 41-51 and a full 11 games behind the Giants in the National League West. But they have had a few individually great seasons, including one by Matt Kemp, who is having his best season by far. The center fielder will be on display Monday night at Chase Field in Phoenix, Arizona, taking part in the 2011 Home Run Derby on ESPN, the marquee event on Monday for the MLB All-Star Game.

Kemp has really blossomed this season, hitting .313/.398/.584 with 22 home runs and 27 stolen bases. He has been on pace for a 40/40 season for most of the season, though a recent power outage -- no home runs in his last 12 games and 50 plate appearances -- has dropped his home run pace all the way down to 39 bombs for the year. Kemp is the fourth Dodger ever to participate in the Home Run Derby, and the first since Hee Seop Choi in 2005. 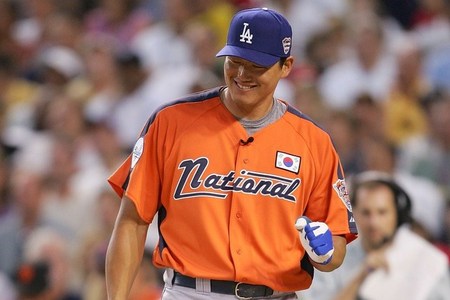 Choi (left) was not an All-Star in 2005, but that was the year MLB decided to switch up the format from the contest. As part of the promotion for the upcoming World Baseball Classic, Choi was one of eight players from eight different countries selected. He hit five home runs, and didn't make it out of the first round, but it still stands out as the best performance by a Dodger in the event. Mike Piazza hit 59 home runs combined in his first two seasons in the big leagues, in 1993 and a strike-shortened 1994, but he hit all of zero home runs in the derby in both years. Raul Mondesi fared a little better in 1995, but his two clouts weren't enough to advance.

So the bar is set low for Kemp, in terms of Dodgers history in the home run derby. But with his easy swing and flare for the dramatic -- he has two walk-off home runs this season -- the first time All-Star is poised and ready to put on a show in prime time.

The 2011 Home Run Derby starts at 5 p.m. EDT, and will be televised by ESPN. For more information on Matt Kemp and the Dodgers, be sure to read the SB Nation blog True Blue LA.