Share All sharing options for: The Five Most Memorable Freeway Series Games Between The Dodgers & Angels

As the Angels and Dodgers resume their Freeway Series rivalry Friday night at Dodger Stadium, it's time to review the last 14 years worth of interleague play to find the most memorable games between the Angels and Dodgers. Even though the two clubs have played 105 times during spring training in their 50 years of co-existence, we are sticking to regular season matchups for purposes of finding the most memorable games.

The fifth most memorable Dodgers/Angels tilt happened on April 2, 2010 in Anaheim. OK, I lied, this is a spring training game, but bear with me. On the field, this was the first game against the Angels for Garret Anderson, a Dodger in 2010 who had left Anaheim after 15 years as an Angel. Yet, the crowd gave Anderson, holder of several franchise records and a key player on their 2002 World Series winner, just a lukewarm ovation. Just shameful.

But not as shameful as what happened in the stands. The television broadcast scanned the crowd, and found an Angels fan wearing what can best be described as an adult onesie. Then, sure enough a Dodgers fan in similar garb walked into the picture. The result was history: 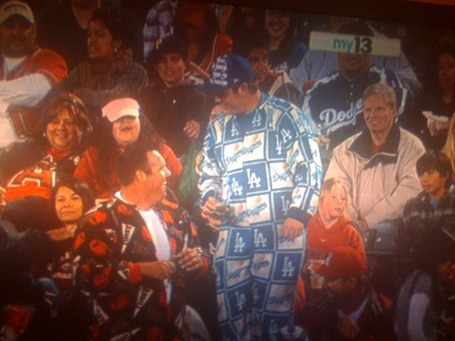