The Oregon Ducks revolutionized the way college football programs dress themselves on Saturdays before they take the field. With the team preparing to face the Wisconsin Badgers in the 2012 Rose Bowl, the Ducks unveiled the uniforms earlier this week.

The uniform itself is not too flashy or out of the ordinary -- well, flashy or ordinary compared to Oregon's standards -- but the helmet is something to behold. Using the all-new Nike helmets, Oregon will be using the most reflective and shiny helmets in the history of football. We have a photo of the wild creation after the page jump... 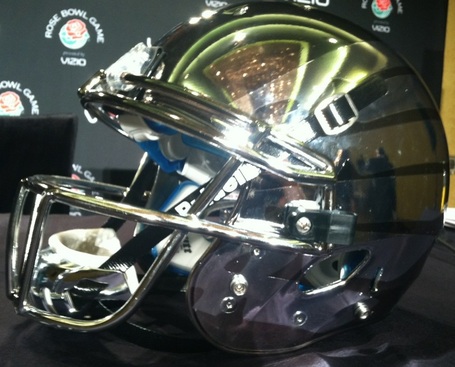 Pretty spiffy, no? We can only hope for clear skies and a sunny day in Los Angeles for the Rose Bowl. That'd really give the Ducks an advantage when they fly down the field with no regard for anything that even resembles a huddle. Sunglasses may be needed.

For more on Oregon and their football program, head on over to Addicted To Quack.