Share All sharing options for: 2011 Rose Bowl, Wisconsin Vs. TCU: Expect A Close Game In Pasadena

The 2011 Rose Bowl Game (presented by Vizio, remember) is upon us. The No. 3 TCU Horned Frogs and No. 5 Wisconsin Badgers will do battle in Pasadena in the game of the day. As we noted yesterday, both offenses have scored the same amount of points this season, but TCU's defense has been the best in the country, and for that reason is a three-point favorite over the Badgers, per our friends at Odds Shark.

Adam Hoge from the SB Nation Wisconsin Badgers blog Bucky's Fifth Quarter analyzed the game, and not surprisingly, picked Wisconsin to win the game. It's hard to go against an offense that has scored 201 points in their last three games, and as Hoge says, "The point is, TCU's defense is not unstoppable. The Badger offense might be."

Jeremy Mauss of Mountain West Connection concedes that Wisconsin's massive offensive line is a big advantage for the Badgers, but has a plan for TCU to get around, literally, the Badger offensive line:

A way for TCU to combat the size is to  obviously use speed to beat the Wisconsin tackles off the edge and if that is successful enough and the tackles have to guard against defensive ends like Tank Carder coming off the edge then that could make Wisconsin more vulnerable to linebackers running up the middle to run blitz or go after quarterback Scott Tolzin. The trenches will be the biggest key to see who wins this game.

Both Hoge and Mauss identified TCU wide receiver and return man Jeremy Kerley as a key to the game, as he is the greatest big play threat in the game. Wisconsin has allowed three return touchdowns this season, while Kerley is averaging 28 yards per kick return and nearly 13 yards per punt return this season.

Perhaps another reason for TCU being a three-point favorite is their cool helmet, which was tweeted by TCU student Spencer Jackson yesterday: 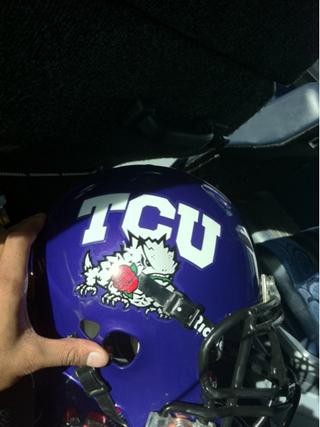