Share All sharing options for: Three Volleys In That Reggie Bush Heisman Story

This is a breaking story that's obviously some ways from being resolved, but here we go: First, Yahoo! Sports, the internet's designated Trojan-haranguer, is reporting that the Heisman Trophy Trust will strip Reggie Bush of the 2005 trophy:

Two sources close to the Heisman trust said the body’s investigation is coming to a close, and will ultimately concur with the NCAA’s determination that Bush was ineligible during his Heisman-winning season in 2005. Because of that independent conclusion, sources said the trust will relieve Bush of the award and leave the honor for that season vacant. The sources said Bush met with Heisman representatives last month at the New York law offices of Emmet, Marvin & Martin.

Next, ESPN's Chris Fowler, himself a Heisman voter, and the L.A. Times say that no decision has been made:

Heisman spokesman Tim Henning told The Times, "The Heisman Trophy Trust has yet to make a decision, and until such time they do we have no further comment."

And finally, Yahoo's Charles Robinson takes to Twitter to defend his reporting: 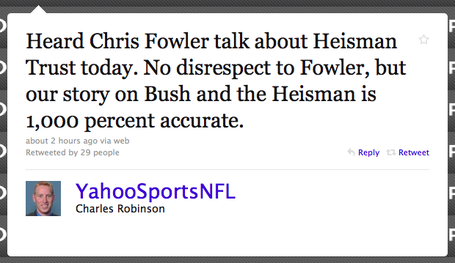 So here we go again, I guess. Here's hoping for a speedier resolution to this story that we got with the initial NCAA investigation -- after all, we've got actual football to occupy us now.