The Bruins and Trojans are both staring down non-conference opponents this Saturday. Here's what to watch for as USC travels to Minnesota and UCLA hosts Houston.

Share All sharing options for: Five L.A. Football Storylines To Watch This Weekend

1.  Can UCLA draw first blood? Bruins Nation examines the need for a scoreboard cushion against Houston:

While we have justifiable concerns about our defense stemming from its conservative schemes, the problem seems time and again it's our offense which has mostly failed to give us any kind of spark during last two years.

Overall, since Rick Neuheisel has taken over UCLA has taken the lead only 11 out of 27 games.  Bruins were 7-4 when they took the lead. Over all Bruins are 4-12 in the games they fall behind early.

2.  Will USC's discipline problems abate? We've spent a lot of time on this particular issue the past couple weeks: The Trojans' early schedule allows for many mistakes, which is a very good thing with this depleted team. Will last week's 13 penalties for 140 yards against Virginia be an aberration, or a harbinger?

3. How's Case Keenum's noggin? Houston's prolific phenom quarterback is recovering from a concussion sustained in the third quarter of last week's game against UTEP; if his coaches keep him sidelined for even portions of the game it will severely limit the Cougars' offensive output. (The Bruins defense can't relax too much, however -- Houston still brings two tailbacks who each racked up over 100 carries last fall to Pasadena.)

4.  Whither Stanley Havili? Conquest Chronicles wonders why the USC staff won't give the elder-statesman Trojan his swan song already:

Havili is a senior so you might as well let him go out in a blaze of glory. Give him his reps reps [sic] and let the chips fall where they may.

5. Is the Big Ten really that mean? Aren't midwesterners supposed to be the politest sorts in America? 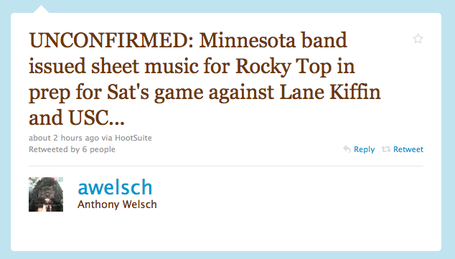