Real Madrid makes a real splash, gets the royal treatment as it arrives at LAX yesterday.

If you buy something from an SB Nation link, Vox Media may earn a commission. See our ethics statement.

Share All sharing options for: Real Madrid Gets Royal Treatment

For the third time in four years, Real Madrid coach Jose Mourinho has brought his team to Los Angeles finishing up their preseason training. The team shall practice at UCLA for the next week and a half, with a friendly against Club America in San Francisco Aug. 4th, and a second friendly against the Los Angeles Galaxy in the Rose Bowl on Aug 7th.

Coach Mourinho said, in an interview with lagalaxy.com and the San Francisco Chronicle, "It’s an important match for us because the next day the players that participate with their national team will participate in a national team fixture, which for Europeans is a ridiculous fixture." The World Cup winning Spanish national team will be playing against Mexico August 11th in Mexico City's Estadio Azteca.

As a result, the Galaxy can expect Real Madrid to be playing full speed in a dress rehearsal for the year ahead. If Manchester United, who are in a similar situation and ran over the MLS All-Stars 5-2 yesterday, are any indication, the Galaxy are going to need to play their very best soccer. According to coach Bruce Arena at the CONCACAF Champions League press conference, this friendly is priority number three for the Galaxy, behind the match with the Chicago Fire on Sunday and the Champions League return leg next Wednesday in Puerto Rico. 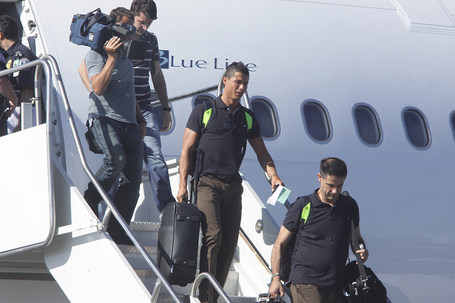 In other Galaxy news, David Beckham has said through a spokesman that he has no interest in leaving the Galaxy for West Ham, and a return date as early as August 9th was given, though that is simply a return to the team. Team doctors will then assess the injury and give an official return date. Per The Telegraph

Landon Donovan admitted after the All-Star game that European teams have placed some offers on the table. MLS commissioner Don Garber has gone on record about his desire to keep Donovan in MLS, but also said that they would not simply ignore a completely silly offer, per The Daily Mail